A nationwide project is underway to determine what information berry growers are lacking for tunnel production.  If you currently grow berries in a tunnel or are even thinking about it, take fifteen minutes and fill the surevey out.  It is 100% annonymous and does not request any personal information.

Below is the request that was sent out.  Please pass it along to anyone you feel would be intrested.

The purpose of this research is to gather input from growers to ascertain the directions in which to take future high tunnel research and extension efforts on berry crops. High tunnels refer to temporary protective structures and include hoop houses, temporary greenhouses, unheated greenhouses, and rain or sun shelters, but not permanent greenhouses that are temperature-controlled.

We ask that you provide input through a 15 minute survey about your experiences and/or concerns with growing berries in a high tunnel, and if applicable how production and marketing differs between production in high tunnels and in the field. You will also be asked to comment on issues and challenges you’ve encountered or expect to encounter and what educational information you believe will assist you in achieving your production and marketing goals.

Your decision to be in this research is voluntary. You can stop at any time. You do not have to answer any questions you do not want to answer. You must be 18 years of age or older and either be someone who has produced berries in a high tunnel (including a hoop house, temporary greenhouse, and rain or sun shelter), or someone who is considering producing berries in a high tunnel to take part in this research study.

We thank you in advance for your help with this project.  To participate in the study please click on the link:  https://www.surveymonkey.com/s/hightunnel

New Field And Tunnel Trials For 2011

The University of Arkansas has released three primocane blackberries.  Pime-Jim® and Prime-Jan® where both released in 2004.  They are still very popular but the flavor is not as good as some floricane varieties, and winter cane injury called into question their hardiness.  Even though they have been grown as far north as USDA zone 3, I did not feel that they would produce well on top of my windy hill in zone 5.  In 2009 Prime-Ark® 45 was release.  This may be a game changer.  Reviews say that it is much hardier, better tasting, and provides better yields than its predecessors .  I have ordered enough plants for a tunnel trial as well as a field trial.  At this point I am cautiously optimistic.  The Black Satin thornless bushes that were planted last year, are doing well.  Pruning them does not turn into a blood letting session so I ordered Ouachita thornless blackberries for trial inside and out as well.

We have also added to our raspberries.  I increased the amount of Heritage we have planted and have added Caroline, Joan J, and Polka.  If the Polka plants produce I think next year at this time I will be making some Paczki filled with raspberry preserves.

Hopefully with the addition of primocane bearing plants, even if the rabbits use the tunnel as a salad bar next winter, we will still have a sizable harvest.  If all else fails, I ordered several Ghost Pepper plants, maybe I should let the critters bite into one of those.

High tunnels are becoming more and more popular for home and market gardening.  The biggest advantage to a high tunnel is the extended growing season it gives you, especially in northern climates.  The other huge advantage is the ability to have complete control over the irrigation of your crops.  Some crops such as berries will absorb water through the fruit itself and weaken the flavor, so growing in a tunnel can provide a superior product.

I spent a couple of years researching tunnels before I finally built one, and I am glad that I did.  DIYers can find tons of plans and tools, and for people that want the engineering done for them, there is a multitude of kits for sale.  After a long debate I ended up building my first tunnel from scratch.

I bought a 20’ hoop bender from the folks over at Lost Creek Greenhouses and followed their plans with just a few modifications.  The bender is designed to work with top rail for chain link fencing.  One challenge I had was finding 16 gauge steel, after a long search I had to use thinner 17 gauge.  So far we have not had any issues (with the steel).  With some help from family and friends it did not take long to get the 20’x40’ tunnel erected and covered.  We had so much success in the small tunnel, that we built a second, much larger tunnel that measures 26’x96’.  The larger tunnel was built from a kit made by ClearSpan (FarmTek).

For the average home gardener, I think it is 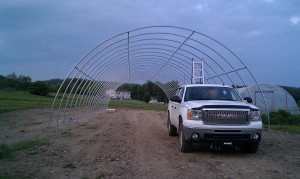 safe to say that a homemade tunnel will more than suffice.  However I would caution against building anything wider that 20’ without going to a kit.  For length, anything too far over 100’ can cause a ventilation challenge, so if you need more space than that, build two.

Now that we have two tunnels up and running I would like to share some lessons that I have learned.

Leveling the site is important, but be sure to preserve your top soil so you have something to plant in.  Also, if you are using raised beds they can turn into dams during a storm or spring melt.  I have found that a slight crown to the site works best for larger tunnels.

This can’t be over stated.  But seriously, it is important.  If you are trying to keep initial cost low you can go with a middle of the road film and upgrade it when it is time to replace it.  (This is what we did.)

A lot of plans call for 1×3 or 1×6 boards to attach film and Wiggle Wire to.  I have learned from personal experience that a 1×6 board that is bolted to Wiggle Wire will actually shatter in 80 mph winds, we went with 2x6s on the second tunnel.  If you are using Wiggle Wire with a board backing, be sure to drive tek screws through the channel, board, and hoop when possible.

This can be hard on film if you plan on taking the film off every winter but it does make attaching film easier.  There are other systems out there that may be better, but I only have experience with wiggle wire.

Even with the sides up and ends open, humidity can be higher in a tunnel than outside.  This means it can take longer for leaves to dry, giving diseases and fungus a place to take up residency.

I hope you found some of this information helpful.  I will be adding construction photos as soon as I have time to dig them up.  If you are interested in building your own high tunnel and have questions, feel free to leave a comment or use our contact form.  If I can’t answer your question I bet I have a friend that can.